What parents need to know about “brain hacking”

It would appear that the apps we and our kids have on our devices may actually be hacking our brains. 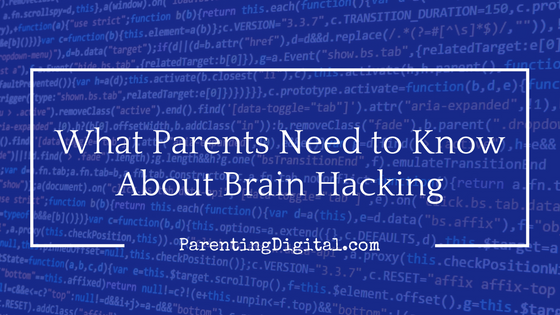 What is brain hacking?

“Inadvertently, whether they want to or not, they are shaping the thoughts and feelings and actions of people,” said Harris. “They are programming people. There’s always this narrative that technology’s neutral. And it’s up to us to choose how we use it. This is just not true.”

Harris also expresses concern over the impact of such programming efforts. He warns that the constant distractions of apps and emails are “weakening our relationships to each other, and destroying our kids’ ability to focus.”

Also interviewed in the episode are researchers like Larry Rosen at California State University Dominguez Hills. Their research suggests that “our phones are keeping us in a continual state of anxiety in which the only antidote – is the phone.”

Referring to cortisol, the fight-or-flight hormone, Cooper wryly observes, “So the same hormone that made primitive man anxious and hyperaware of his surroundings to keep him from being eaten by lions is today compelling Rosen’s students and all of us to continually peek at our phones to relieve our anxiety.”

Other takeaways from the report:

The idea of technology being legitimately addictive is still being studied and debated, but there is no doubt that it affects us in addictive ways.

Problematic media use is a term that describes dysfunctional ways of engaging with media and encompasses many related terms, including Internet addiction, technology addiction, Internet gaming disorder, and others. Media users’ problematic relationships with media and devices, such as smartphones, could be characterized as compulsive, obsessive, or unhealthy.

What can parents do to prevent brain hacking?

So, now we know what most of us already suspected (just examining our own tech use.) What can we as parents do about this?

Of course, we could petition and boycott and write our representatives. But let’s be honest: there is a lot of money to be made in app development. Even Apple turned down Dopamine Lab’s Ramsay Brown when he tried to sell a habit-breaking app on the Apple Store. (Apple didn’t want “any app that would encourage people to use other apps or their iPhone less.”)

Instead, let’s just teach our kids differently about that device in their hand. Here are some suggestions:

How have you and your family reduced your “addiction” to your smartphones and devices? Help us out with your ideas by adding to the comments below!