What parents need to know about virtual reality

What if you could take your kids to see the pyramids of Egypt or the Great Barrier Reef? Can’t afford such an extravagant trip? Enter virtual reality. 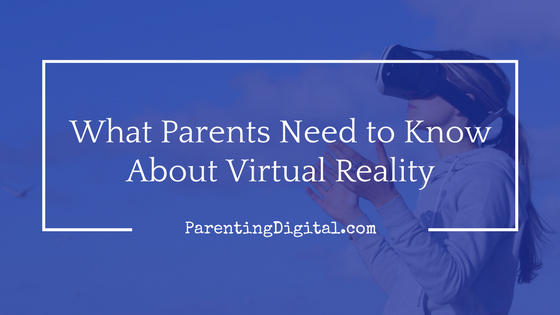 Technology has made possible all sorts of incredible tools for breaking down communication and broadcast limits, allowing us to talk face-to-face with someone on the other side of the world.

Virtual reality allows us to, in effect, go any place in the world…without the unreasonable baggage fees or jet lag.

What is virtual reality?

In a virtual reality, or VR, environment, users are completely immersed in the image of a virtual world through a headset or goggles. By turning their heads, they can view the “world” around them and, in some cases, move through and interact with that world.

The virtual world they see in the viewer can be a real photographic image or video, shot with a 360° camera. In other cases, the world is completely computer-generated, like a video game.

Sound can be incorporated into the virtual world to enhance the experience, and other devices like hand-held controllers and specialized treadmills can be used. Some of these technologies are still prohibitively expensive, though, costing thousands of dollars and requiring special programs to run.

Headsets, however, have dropped in price to the point of making them accessible to anyone. A set of inexpensive goggles can be had for about $20 or so.

Google, not surprisingly, pioneered a set of goggles made out of cardboard. It is called (wait for it…) Google Cardboard. This is literally a piece of cardboard with a couple of cheap optical magnifiers that folds up into a viewer. Users install one of the many VR apps, pop their smartphone into the viewer, and off they go into a virtual setting.

Other more expensive viewers can be connected to a laptop or gaming device. This allows viewers to see through the goggles what they would see on a screen, but with the benefit of seeing everything in a 360° environment.

For a while, teachers have been able to take their classes on “virtual field trips,” taking them to some museums and historical sites that would be too expensive for travel. How cool to be able to see some of the paintings in the Louvre through a website the students can click through, huh?

Or, they could strap on a virtual reality headset and the teacher could walk them through the Louvre. Students could “look around” at whatever they wanted as if they were there.

Or how about standing on the Great Wall of China. Or wandering around Antarctica.

Through Google Expeditions and other up-and-coming tools, teachers and students (and parents) can immerse their children in these experiences, opening up a world to them they might not otherwise get to see.

While these teaching opportunities exist, let’s face it: that’s not what the kids really want to do with VR.

While the development of virtual reality has been underway for decades, the gaming industry has been a key driver behind making it available to all.

Gamers can connect VR goggles to their favorite game and, in some cases, experience it in a realistic, immersive setting.

This, of course, comes with some real concerns from parents, physicians, and psychologists.

When you strap on a VR headset, it is easy to forget the physical world around you. Any time I’ve used VR with children, I’ve had to remind them constantly, “You can’t walk around. Keep your feet in one spot!” The temptation is so great to, literally, walk around while in the virtual world.

VR can also cause some dizziness and even vertigo in some users. Most people experience some form of disorientation when they transition from the virtual back to the real.

When you were a kid, watching TV, how often did your mother tell you to back away from the screen? “If you sit that close, you’re going to kill your eyes!”

Physicians have begun to worry about the effects of having a screen that close to the eyes, especially for children, for long periods of time.

In the same way that listening to loud music on earbuds just millimeters away from your eardrums may cause more damage, experts are beginning to fear the same may happen with our eyes and close-up screens.

Apart from the physical issues, there are growing concerns about the psychological effects that long-term VR use may have, especially on developing minds.

Most kids (mine are no exception) have some difficulty unplugging from a screen and re-engaging with the real world around them. In our house, if screen time has gone much longer than intended, we have a term for this struggle to set aside the virtual world and once again join the real people in their family: re-entry.

Because VR completely immerses users in the environment–and the goggles themselves block out all peripheral vision–it is even easier to forget there is a real world, much less re-enter it.

When we think of the immersive quality of VR, it’s one thing to think about cool virtual field trips.

VR, then, has the potential to make the already graphic or harmful more so. And for kids, hiding it from parents is even easier when you no longer have to hide your screen. It’s now strapped to your face.

It’s important to note that even some VR headset manufacturers do not recommend use by children under 13, likely for many of these same reasons.

All things in moderation

Virtual reality, like most things technological, requires a balancing act. The concerns listed above are not reasons to ban VR from your home or school. Instead, they are reasons for thoughtful, moderated use.

I love the power of virtual reality to transform a classroom into a world half a planet away. It is amazing watching kids light up with that kind of discovery. And for most schools starting to use VR, it’s a short-term activity under the direction of a teacher or librarian. It’s social, active, and exploratory.

Even at home, VR could be an amazing way to explore or game as a family or group of friends. A growing number of apps makes it easy to experience virtual reality through a cheap cardboard headset and your smartphone.

But it’s the image of the lone kid, plugged into his game console for hours and blinded to the outside world, that worries me.

Virtual reality should give us the opportunity to *visit* other worlds outside our own. Not live there.

What experiences have you had with virtual reality? Share them with your fellow parents by adding a comment below!