When the first storytellers began weaving the tale of what would become Little Red Riding Hood, as early as the 10th century, they certainly had no idea what online predators were. 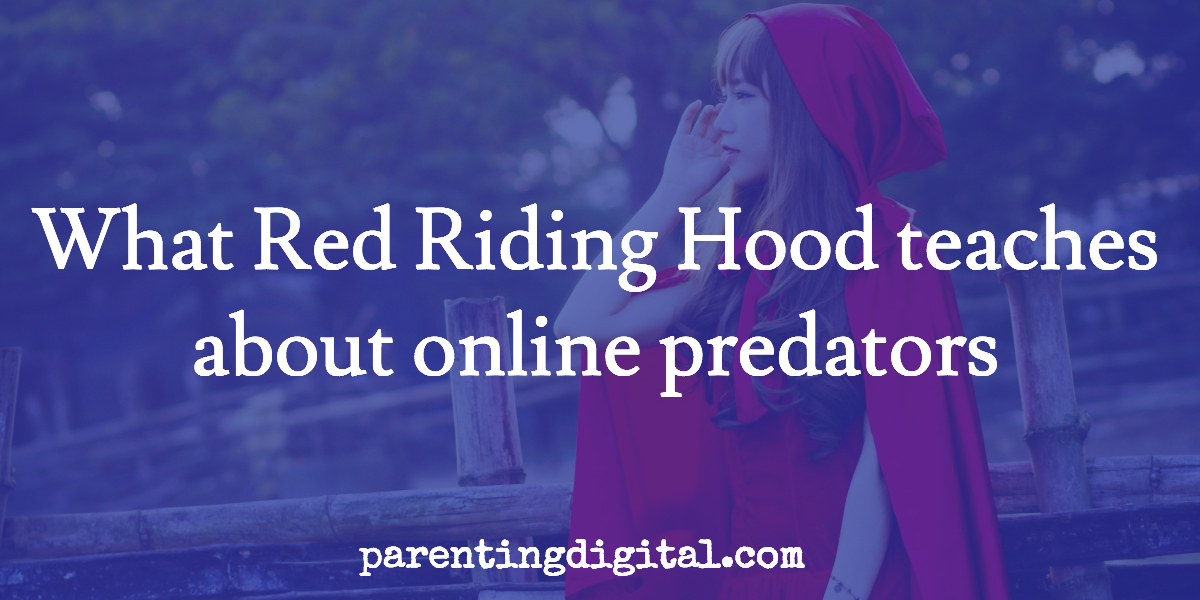 Neither did the Brothers Grimm as they put the story down on paper in the 1800s. Nor did Stephen Sondheim and his team when they adapted the story into the successful musical, Into The Woods, in 1987.

It was while watching the broadway version recently that I got thinking about the lessons taught to us by our scarlet-hooded heroine and her canine nemesis, the Big Bad Wolf.

During a recent date night, my wife and I were enjoying a wonderful performance of Into The Woods at a local community theater. Based on a variety of well-known fairy tales, the musical mixes up the stories of Jack and the Beanstalk, Rapunzel, Sleeping Beauty, and others in a quest that takes them, well, into the woods to untangle all that has become tangled.

One key set of scenes is between Little Red Riding Hood, on her way to Grandmother’s house, and The Wolf who is looking for a bite for lunch. The first exchange, in the song creepily named “Hello, Little Girl,” The Wolf attempts to distract and “seduce” Red.

What’s your rush
You’re missing all the flowers
The sun won’t set for hours
Take your time.

Mother said “straight ahead”
not to delay or be misled.

But slow, little girl
Hark and hush
The birds are singing sweetly
You’ll miss the birds completely…
Any path
So many worth exploring
Just one would be so boring
And look what you’re ignoring

Little Red knows what she is supposed to do here. The Wolf is tempting her with anything that would draw her off the path. He points out things she might not have otherwise noticed, and he keeps up a string of distractions to keep the girl from remembering the lessons she has been taught. Finally, she gives in, singing:

Mother said
Not to stray
Still I suppose
A small delay
Granny might like a small bouquet.

Johnny Depp definitely created the creepiest version of The Wolf

An online predator will often try to drive some sort of divide between the potential victim and their parents. If the victim can begin to question the wisdom of the parental advice and warnings, the predator can more easily draw the target away. He will use anything to distract and redirect attention away from what has been taught toward that which is new and intriguing. More on that later.

Lesson #2: Online predators count on the child’s lack of judgment about people

Little Red Riding Hood is eaten, of course, thanks to her poor choice to stray from the path. After being rescued from the belly of the wolf (who writes this stuff?), the musical version of Red sings of her experience.

Mother said,
“Straight ahead,
Not to delay
Or be misled.”
I should have heeded her advice…
But he seemed so nice.

If we as adults are easily fooled and make errors in judgment about people, we should not be surprised that our kids are not very good at this skill either.

Predators count on the fact that children aren’t as skeptical and wary of people as adults are. They sometimes pose as other kids, or chat about “kid” issues, problems, and topics because they know other kids won’t be as alerted to something amiss.

Kids want to see people, even strangers, as “nice”. We spend so much of our parenting trying to teach “stranger danger” for this reason. And this judgment is so difficult to teach, isn’t it?

This is where fear rears its head in our parenting. We see something that is clearly a danger, yet our children are clueless to it. How can they not see that!? we wonder. Just as we listen to the Wolf and think, How is she falling for this song-and-dance?

So, like Mother, we keep giving the advice. “Straight ahead, little one. Straight ahead.” And we hope and pray that mantra will be fresh in their mind when the moment of decision arrives.

Lesson #3: Online predators prey on the natural curiosities and interests of children

And what is it that finally tips the scales in The Wolf’s favor? What causes Red to make a choice against her mother’s teaching?

And he showed me things,
Many beautiful things,
That I hadn’t thought to explore.
They were off my path,
So I never had dared.
I had been so careful
I never had cared.
And he made me feel excited-
Well, excited and scared.

Predators know that children (like adults) are naturally drawn to novelty. Pedophiles will often manipulate their potential victims to let down their guard by sharing new, exciting, even forbidden things. They will play with a young person’s natural curiosity about sex. They will give the victim “permission” to explore and experience things they never were allowed to before. This enticement sometimes takes the form of physical gifts and a promise of an exciting new life away from constraints and parental rule.

Lesson #4: Kids can learn how to spot potential online predators

As she continues to recount the gruesome details of her sickening journey “down a dark, slimy path, where lie secrets that I never want to know,” Little Red reunites with Granny and is rescued by the knife-wielding Baker (in the musical).

Her assessment of the situation is clearly one of regret, but it is also laced with hard-won wisdom.

And I know things now,
Many valuable things.
That I hadn’t known before.
Do not put your faith in a cape and a hood,
They will not protect you
The way that they should.
And take extra care with strangers,
Even flowers have their dangers.
And though scary is exciting,
Nice is different than good.

Do not put your faith in a cape and hood. Or your iPhone settings. Or your Instagram privacy. Or your filtering software. Or…okay, dead horse.

I like how she says “take extra care with strangers.” Notice she doesn’t say “avoid strangers at all costs and never interact with them.” This extra care is a healthy dose of skepticism that I think we should be trying to instill in our kids, for both on and offline situations.

The Wolf who “seemed so nice” turned out not to be good at all. The predator who seemed so nice online, who treated me so kindly, who validated all my emotions and insecurities, who agreed when I complained about my parents, who also said he hated school, who flattered and complimented and liked me. Turned out he was, well… different than good.

Lesson #5: Despite happy endings, some innocence is always lost

In the end, Little Red Riding Hood is unharmed. But she is not the same as she was before.

Of course, online predation is nothing to ignore; every year, kids are groomed and harmed by those with evil intent. Fortunately, most kids that are approached by an online predator don’t pack a bag and go running off with him. And not all kids that are online are contacted by such bad wolves, despite how sensational the headlines are.

Nonetheless, most will inevitably encounter something unpleasant or disturbing online. Some image that is shared. Some nasty comment that is made. Some inappropriate offer or suggestion. And we hope they turn it off, walk away, and tell a trusted adult.

But when they do encounter such things, as Red reminds us at the close of her song:

Now I know:
Don’t be scared.
Granny is right,
Just be prepared.
Isn’t it nice to know a lot!
And a little bit not…

So we cheer for her that she has learned “many valuable things,” and that she is not scared anymore and ready to face the next temptation.

But she’s not unscathed. Some of her innocence has been lost, along with some of her childhood.

Sure, this is what growing up is all about. We learn that the world is not all roses and rainbows. We grow a little more skeptical, and a little more cautious, of the world around us. Even the witch sings about this in another part of the story:

Don’t you know what’s out there in the world.
Princes, yes, but wolves and humans, too.

And just like the witch learns, we parents can not always shield our kids from it all.

But we can guide them. I think, in a digital landscape where they “know” more than we do, our most important role is to prepare them for a world of adulthood. This means letting them fall and fail, with all the support we can possibly muster around them. It means guiding them through the rough and unpleasant part of growing up online.

Yes, it means protecting and filtering and monitoring sometimes, too. But it also means guiding them smoothly from that innocence and naivety we first see in Little Red Riding Hood to a balanced, savvy, eyes-wide-open adult. The challenge is to help them avoid becoming fearful, jaded, or cynical in the process.

I often think that our parents had it so much easier, when kids didn’t have 24/7 access to a world that had 24/7 access to them. It was a safer world back then, right? Less to fear and fewer dangers. A simpler era.

Once upon a time?

For more characteristics of online predators and their methods: How Do Online Predators Operate

Previous Post 5 TED Talks to help with digital parenting Next Post Big Tech has crossed a line, and that’s good news for parents and kids