Dangerous apps kids should not have on their phones. Period.

Even as someone who usually tries to focus on the positive aspects of technology, I have to admit that there are some dangerous apps for teens and tweens that we need to watch out for. 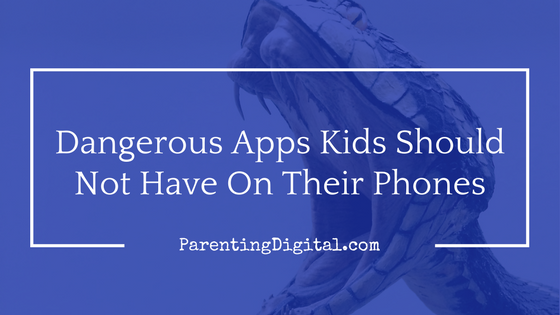 I normally cringe when I hear parents talk about how dangerous the internet is and every internet user is a pedophile and all technology is destroying their children, etc. But taking a “balanced” approach to the tech in our kids’ world means acknowledging that some of it is legitimately alarming.

While some of the apps listed here have their merits for an adult audience, they have no business being on our kids’ phones.

It’s no secret that online dating has exploded over the past decade or more. Some adults report meeting their significant other online (5% of committed relationships in the U.S., according to one study.) Many others, however, have bought into a culture of “hooking up,” which can mean anything from dating to regular casual sex.

Technology, of course, has made it easier to do this. Teens and tweens, naturally, want a peek into this world.

Concerns: The obvious audience for the app is for adults, and the app has a Mature/17+ rating in the iOS App Store and Google Play. The app also can be location-based, displaying how far prospects are (by mileage) from the user.

Dubbed the “Tinder for Teens” by the BBC, Yellow uses kids’ SnapChat and/or Instagram usernames to create profiles that can be seen by others. Like Tinder, users swipe left or right to make “new friends” or reject others. Friends can then chat and send images to each other.

Concerns: At its very core, Yellow is “talking to strangers” and allows others access to usernames (where they can see more about the user.) The app is rated in both stores as Teen/12+, but there have already been reports of sexual predation and inappropriate photo sharing on the app. While it doesn’t appear to be location-based, kids can easily share personal information in the chat area.

Down is another “dating” app, formerly called Bang With Friends, which probably tells you all you’d want to know about it. Also working on the “swipe” system, users can choose between Get Date for a potential serious relationship and Get Down for a casual hook-up.

Concerns: The app is rated Mature/17+, as we should expect. The app has over 5 million users, so your teens and tweens have probably at least heard of it. The app can search for others based on location, as if there weren’t enough red flags on this one.

This app makes a game out of rating people, based solely on their profile picture. Users can find others near them, chat, flirt, and choose to meet. According to the app description, “Hot or Not will show you how popular you and your friends are, as well as a list of the Hottest people nearby, wherever you may be; at a music festival, on college campus, or hanging out in the city.”

Concerns: This app is also rated Mature/17+, but there are even more users. (Their site claims 330 million users.) Apart from the location-based, hook-up purpose, this app is more overt in its goal to objectify people. Making a decision solely based on outward appearance is, literally, a game in this app.

The next family of apps allows users to push a button and immediately broadcast themselves to the world, or at least a select portion of it. While some live-streaming apps have merits and can be used responsibly, here are a few that kids have no business using…or even viewing.

The very tagline of this video chat site should send up red flags: “Talk to Strangers!” Omegle pairs you up with a random stranger for an “anonymous” text or video chat. The front page of the web version of the app even admits “Predators have been known to use Omegle, so please be careful.”

Concerns: Obviously, the biggest concern is that the purpose of the entire app is to match users up with people they don’t know. Since it’s a website, not an app (though it can be easily accessed on a phone or tablet), it doesn’t have the usual app ratings. The site states that no one under 13 may use the site, and users under 18 may do so only with a parent’s or guardian’s permission.

Like other live-streaming apps, YouNow allows you to broadcast live and watch others’ live broadcasts. There are leaderboards to encourage broadcasters to log more live time and watchers to make more comments. Content is often tagged into a category like #bored, #girls, #ask_questions, or #truthordare.

Concerns: The app is rated for Teens/13+, but there are many reports of nudity and pornography within the content as well as predators using the app to get access to minors. I mention other concerns in a separate post on live-streaming apps, including the use of “channels” like #sleepingsquad, where users can broadcast themselves sleeping and watch others doing the same. I know.

IMVU is a 3D virtual world where you create an avatar (a cartoon-ized version of yourself) and meet and chat with others. You can virtually shop and try on outfits, explore new environments, and express yourself with emojis and filters.

Concerns: While IMVU is not technically a video chat app, it is ranked as Mature/17+ and should not be used by kids. At least it is not a video broadcast (they are only represented by avatars), but the environment is still clearly meant for adults only.

I’ve paired these two functions together because they so often exist together in one app: the ability to chat and send photos (or even short videos.) While there are some chat apps that are relatively safe for tweens and teens, when used appropriately, there are two that are worth mentioning because of significant issues.

Kik allows you to chat with others, either one-on-one or in groups, using just a username. Users can also send photos, video clips, and games. Kik can connect you to “others who share the same interests.”

Yik Yak is a location-based chat app that allows you to connect with people who are nearby. Along with chatting, you can also send photos. A huge number of school districts have banned the app by setting up a “geofence” to prevent students from using it.

Concerns: The biggest concern is the location-based aspect of the app. Connecting with random strangers who also know that you happen to be nearby is never a good thing for kids. The app’s content has reportedly been rife with sexual material as well as hate and abusive speech.

For this last one, I’m just going to group them all together under one heading. These are apps for hiding photos. Many of them are designed to look like a calculator, but when you type in a code instead of a math problem, you get your secret vault of pictures and videos that you are hiding.

Concerns: Can I just state the obvious here? Why does your teen or tween need to hide photos from you? There’s a very good chance that they aren’t hiding sunset pictures or cute photos of the family dog.

Vaulty, Calculator%, Photo Locker, Private Photo Vault, and SpyCalc are just a few of the hundreds that seem to fall into this category. Oh, and to make matters worse? The calculator facade used as the “secret code” panel? Yeah, it usually works like a regular calculator, too.

What can parents do about dangerous apps?

Because digital trends and popular apps change so quickly, trying to police our kids’ devices for “bad apps” is like playing a futile game of whack-a-mole.

Yes, we should be aware of the dangerous ones and even check our children’s devices occasionally. We do have a responsibility to keep our eyes open to where our kids are online. It’s not spying; it’s called *parenting.*

More effective, perhaps, is to talk more openly with our kids about the apps that are available. Make it clear that there are expectations of what they can and can’t have on their phones, for example. Be specific in the criteria they should use when deciding whether to download an app (if you’ve given them that freedom.)

I’d love to know: what are some of the criteria you would (or do) use when teaching your kids what is acceptable and what is inappropriate when using apps? Add to the conversation in the comments below.

Previous Post What parents need to know about “brain hacking” Next Post Not a tech savvy parent? Try these 5 simple steps