What parents should know about anonymous apps

The rise of anonymous apps reminds us that kids today are just like we were: there are some things we want to keep from our parents. 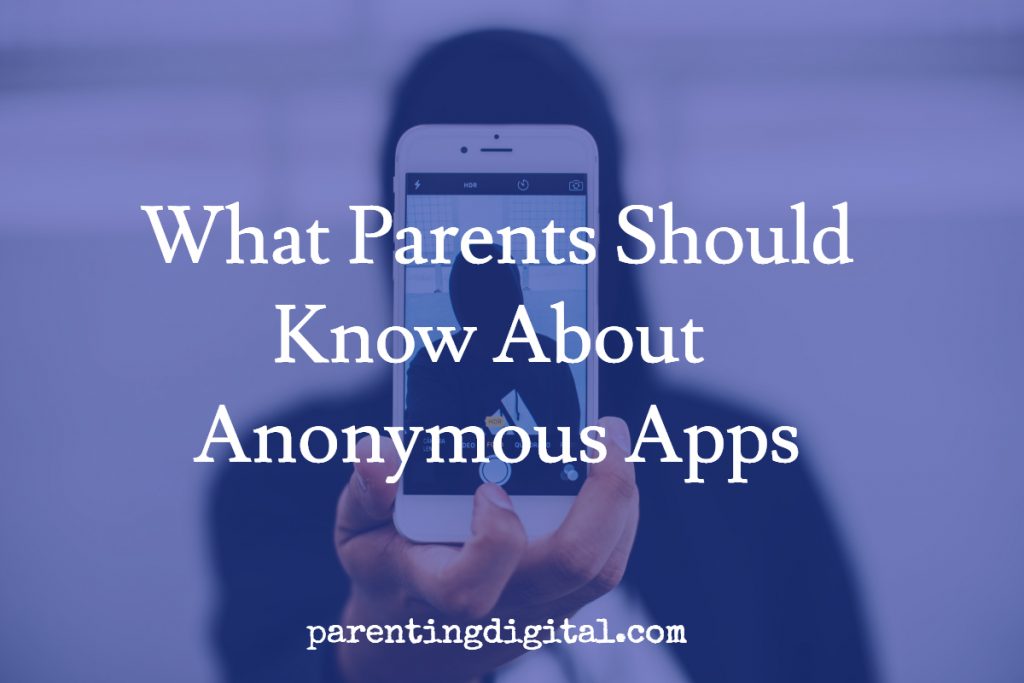 Before smartphones, kids used to write their private thoughts in things like diaries (remember those?) They would have been mortified if anyone read their secrets.

Now, they can share them with total strangers for feedback and comment, and they can do so without anyone knowing who they are. They can jump on, chime in, and get out…anonymously.

This type of app should create some concern for parents, as it has for online safety and mental health experts. Most of these are billed as “safe places” to share private thoughts, but almost all have been marred by abuse and incidents of cyberbullying…or worse.

Some apps that were widely used in the past few years have shuttered due to ongoing problems.

Yik Yak was an online bulletin board aimed at high school and college students. The app anonymously connected users who were within a 5-mile radius. Plagued by incidents of abuse, cyberbullying, and links to criminal behavior, Yik Yak shut down in April 2017.

The Secret app encouraged users to divulge “secrets” through text and photos. It also had issues with privacy and cyberbullying and folded in 2015.

And for a brief moment, we thought we were witnessing the death of one of the most problematic anonymous apps: Kik (or Kik Messenger.) In early fall of 2019, the company announced it would shut down the immensely popular app.

Not surpisingly, the app was acquired a month later by Media Lab, a holding company that also owns Whisper…another anonymous app.

Not only is Kik here to stay, but there are many other anonymous app alternatives still popular with kids. And we may as well start with…

One of the first popular anonymous apps, Kik (or Kik Messenger) was launched in 2010 and has reported well over 300 million users. The app connects with your phone’s contacts, but you can also find people through groups and similar interests. Users can chat with others (or with “bots”) using text, images, video, and other content. Users must provide first and last name, email address, and birthdate (to “verify” they are at least 13 years old,) before creating a username.

Long-standing concerns about Kik involve cyberbullying and predator use. Younger users can connect to anyone through various groups without knowing who other users are. Though Kik has developed some safety resources for parents and law enforcement, their reputation remains as a dangerous app for kids.

Sarahah (Arabic for “honesty”) was originally designed to allow employees to give anonymous feedback within a company. It has quickly become wildly popular with kids and teens, especially with a feature allowing them to connect it to their SnapChat accounts. The App Store and Common Sense Media both give the app a 17+ rating.

Early in its life, Sarahah began following in the footsteps of other anonymous apps, deteriorating into a potential cyberbullying tool. Privacy is also a concern as the app uses the phone’s contact list for messaging people you know. There are some safer settings that can help protect kids and keep their information safe, but users could still be subject to abusive behavior.

Highlighted as the “only anonymous app with positive vibes,” users are not allowed to write their own messages in tbh. Instead, they connect with friends and choose pre-selected phrases and positive compliments. Rated 12+ in the App Store, the app is designed in a game format where users anonymously answer questions about friends in a poll format. They can earn gems every time their name is chosen.

The app has raised privacy concerns as it collects contact info from the phone. It also requires users to provide a grade level (essentially, their age) and a location to find the school they attend. There is also no verification in place to prevent adults from creating accounts and pretending to attend a particular school.

An incredibly popular app with over 30 million users, Whisper allows users to anonymously share secrets that are then paired with an image. A large percentage of these confessions are sexual in nature, and the majority of users are women between 18-34, according to the company. The app does have a 17+ rating on the App Store, but is only rated “Teen” in Google Play. Most experts agree this app has no place on a child or teen’s phone.

This app is designed to allow anonymous posting of texts and images to those in your own school. Users allow the app to find their school through geolocation and require verification through Facebook (not a popular app with teens anymore!) Advertised as a way to share and reach out to those near you, After School has made some significant improvements over the past couple years, after a controversial start.

Live moderators help to keep cyberbullying at bay, but no anonymous system is fool-proof against would be attackers. Verification procedures is a double-edged sword making it more difficult for potential predators to get “into” a school, but equally difficult for parents to monitor their child’s online behavior. Rated 17+ on App Store and Teen on Google Play.

With 215 million accounts, Ask.fm allows users to create profiles and ask and answer questions with others. Users, who are supposed to be 13, can choose to be anonymous in these interactions. The site has a troubled history of cyberbullying, lack of any moderation, and no reporting features. Teen suicides have been linked to abuse received while on the site. The company changed hands in 2014 and began working with law enforcement and internet safety groups to create guides and safeguards. Many, though, say it is still a dangerous place where kids can be cyberbullied easily.

Tellonym lets users ask anonymous questions and get feedback from their “friends.” Users must register with a phone number or email address and indicate whether they are over or under 16 (even though the app is rated 17+ on the App Store!) The app can also be quickly linked to popular social networks, creating a wider audience for the requested feedback.

As with all these apps, there is a real risk of abusive behavior and cyberbullying. Users have reported such cruelty, including encouragement to “kill yourself.” The connection to Snapchat, Instagram, and other apps creates additional concern because of the potential to go well beyond the app’s text-based interaction and the slightly more controlled “friend” environment of the app itself.

Lipsi is another social media app designed to provide anonymous feedback from strangers. It claims to be “the platform that attracts the boldest who want to step out of their comfort zone.” By posting a link on their Instagram accounts, users invite others to comment and provide “constructive feedback” on their photos and videos.

The app is rated 17+, but many of its users are clearly younger. In fact, the app description states that Lipsi “has proven to be an indispensible tool for many of the youngest generation yet.” In an even bolder move, it claims to be a tool for mental health advocacy, giving users a place to reach out to others. (Hmm, maybe we could leave that job to people who know what they are doing?)

These, of course, are not the only apps built around anonymity and secrecy, and certainly not the only ones that tweens and teens want on their phones, but these are the major players for now. Next month, no doubt, another will gain popularity.

The concern about anonymous apps

As you can see in the descriptions above, there is much to be concerned about when it comes to secretive apps that our kids may be using.

Users are not held responsible for their words or actions within these apps. This lack of a watchful eye is what often creates an environment suited for cyberbullying, including abusive language, encouragement to self-harm or suicide, and dangerous challenges. We all tend to take greater risks when no one is watching, don’t we?

Kids say or write things outside of the context of a relationship and without face-to-face interaction. We don’t see confusion or hurt in the other person, so we can’t see the negative impact or harm we are doing. Even if a bully is hoping to do harm, he or she doesn’t have to contend with the reality of their attack as seen on their victim’s face.

Issues of identity and mental well-being

If kids are seeking validation and encouragement from anonymous people online, it is very likely they are not getting positive care and security from real friends, family, a faith community, or some other healthy source. Yes, part of it is just the natural curiosity and exploration teens do, but it could also be a red flag for parents to watch for.

What should parents do about anonymous apps?

This is unchartered territory for many of us, but here are a few possible strategies for handling the issue of anonymous apps with your kids.

As much as you can, give your kids a safe place to express themselves in an encouraging environment. Remind them often they can ask anything, without judgment, and they can entrust you with their problems. This may work to lessen the need to confess all their secrets to an anonymous community.

As part of an open policy, have regular conversations about technology and device use. You can include topics like anonymous apps, why someone would want to use them, what the dangers might be, etc. Also, ask them about their friendships and on and offline relationships.

Encourage them to seek out, and help them find, people in their lives that can encourage them and offer wise counsel. Especially look for face-to-face mentors.

Yes, part of your strategy should be putting technology systems in place to filter and monitoring their phones and devices. I strongly recommend doing this openly and explaining the rationale in age-appropriate terms. And remember, this is only one layer of protection, not a complete solution. (I don’t care what the sales page says.)

Create clear expectations for online behavior, and give them the morals and values behind the expectations. The more they understand the reason behind the rules, the more likely they will assimilate those behaviors. They’ll see it as building character, not just following Mom and Dad’s rules.

Have you had any experience yet with anonymous apps? Have your kids asked for any of these? How have you handled it? Add to the conversation in the comments below!